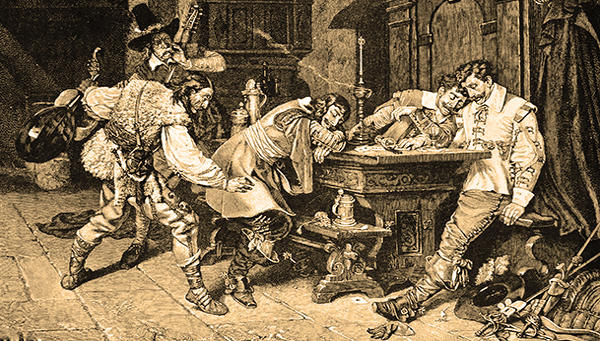 The internet presents many sophisticated ways for drinks companies to promote their brands but, as TBO finds, there is a fine balancing act between getting good exposure and protecting your IP.

Homer Simpson summed it up best when he declared alcohol as the “cause of and solution to all of life’s problems”. For alcohol brands themselves, while the internet and social media can provide ways to develop brands further, they can cause a number of trademark protection problems.

The advantages of marketing online are ineluctable: brands can create new dialogues and interactions with customers through social media, while selling directly to them through online retailers. These methods help to raise the profile of the brand and distribute its products to a larger audience.

But there is a conflict between exploiting the advantages of digital marketing channels and complying with heavy regulation. Alcoholic drinks companies are typically particularly keen to promote responsible drinking, and therefore it is important they retain control over how their brand is presented.

For John Wilks, partner at DLA Piper, the problem such brands face is that on the one hand, “the trademark owner’s gut feeling is to retain control over how their trademark is used, and, on the other hand, what the marketing department wants is to embrace social media, which is all about sharing and encouraging interaction with the brand”.

A lot of drinks brands use their trademarked slogans as hashtags. Foster’s encourages followers to use its ‘Good Call’ slogan (shown below) in their tweets.

Carve yourself out a coldie in no time. #GoodCall pic.twitter.com/B3u8lrZbd3

But encouraging followers to use registered trademarks in this way inevitably presents problems for brand owners. Wilks notes: “The key risk here is that you lose control once something is used as a hashtag.”

Despite having the rights in place, bringing a successful trademark infringement claim against an individual user using its slogan could prove difficult for a brand owner.

Wilks says: “It will be quite difficult to bring about a successful trademark infringement claim, as we’re talking about individuals making comments on Twitter and quite likely not in the course of trade.”

Another popular method of reaching consumers online is playing video advertisements on platforms such as YouTube. Adverts for alcoholic drinks will flash up on YouTube clips before the selected video plays. But the risk of losing control of the trademark is similarly present.

Leighton Cassidy, partner at Field Fisher Waterhouse, says: “The main pitfall of increasing brand presence online is that with greater exposure comes greater potential for loss of control. Once the adverts have been placed online, there is a greater chance that the advert will be picked up by a third party and will appear alongside conflicting content.”

Such a situation may present difficulties for exactly what kind of strategies brand owners employ to combat infringement. Jack Daniel’s won plaudits for the “most polite cease-and-desist letter”, according to Patrick Wensink, an author who was on the receiving end of the company’s trademark assertion for a book he was publishing. On the other hand, Anheuser-Busch has been criticised for an allegedly aggressive approach to protecting its brand. In 2012 it filed a takedown request with the producer of the Academy Award-nominated film Flight, in which the alcoholic protagonist is shown to be consuming Budweiser, one of the company’s important brands.

If a user uploads a video of him or herself interacting with a brand, in a similar way to Denzel Washington’s character in Flight, then there might be very little the brand can do because, again, there is no use in the course of trade.

The ALS ‘Ice Bucket Challenge’ is an example of a successful social media campaign that brands could potentially imitate; however, it is a phenomenon that drinks manufacturers should be wary of. ‘Neknominate’, a drinking game encouraging people to drink to excessive levels that went viral, received a lot of bad press earlier this year due to dangerous levels of consumption.

Drinks manufacturers were keen to distance themselves from the ‘Neknominate’ social media campaign. Drinkaware, the UK-based alcohol awareness campaign supported by various large drinks manufacturers, outright condemned the game. But Wilks notes that if a “particular brand featured prominently, and the video gave the impression that it was endorsed by them, then that is something they will want to take action against”.

"It will be quite difficult to bring about a successful trademark infringement claim, as we’re talking about individuals making comments on Twitter."

Pursuing every video on YouTube that may be using its trademark in a damaging way can be counterproductive for a brand owner and drain limited resources, so the brand may want to issue a takedown notice only in an “extreme” case, says Wilks. He does, however, recognise that the more popular the video becomes, “the greater the backlash will be if you take steps to take it down”, leaving the brand to appear more like an Anheuser-Busch than a Jack Daniel’s.

Online retailers sell alcoholic drinks through their own channels. But where brand owners go, so do those looking to exploit their IP and to make money by selling counterfeit products. HM Revenue & Customs estimates that counterfeit alcohol costs the UK economy £1.2 billion ($1.9 billion) a year, and the health concerns that arise from the sale of such unauthorised, unregulated products create further headaches for brand owners.

It is understandable for brand owners to be pessimistic about confronting this counterfeiting challenge. Cassidy adds: “The fact that the internet is so large and difficult to regulate means that there is an increased chance that online purchasers may find themselves mistakenly buying counterfeited alcohol products.”

It has not deterred brand owners from seeking solutions, however. “Brand owners can use several different options to attempt to restrict this. The first option is to work closely with Trading Standards officers and UK customs officials to clamp down on sales of the counterfeit product, both in Europe and the UK,” says Cassidy.

“Another option for brand owners is to put management systems in place in order to assist them when following up leads between different countries and measuring results and trends over time,” he continues.

Cassidy also recommends that brand owners work with other trade bodies and authorities, and establish partnerships that can better funnel the resources to the biggest potential threats. Alibaba, the Chinese e-commerce company, recently announced a partnership with the China-Britain Business Council to better police counterfeit products sold on its website.

These types of strategies should be encouraged, says Cassidy. “Brand owners should commence online monitoring and communicate effectively with the police. They should also consider communicating with internet service providers with the ultimate aim of working together”.

He is, however, clear that these partnerships may not completely eradicate the problem of counterfeit alcohol products from being sold and that “one should be wary that without effective intervention at the source, takedown notices will amount to little more than chopping the head off the hydra—another two heads will appear in its place”.

He adds: “Work must be taken to identify the counterfeit suppliers producing material and to prevent them from advertising and selling their counterfeit products in the first place.”

Alcohol branding has moved on significantly from the Orson Welles lie detector tests for Carlsberg in the 1970s—where the late actor declares the beer to be probably best in the world—or the comical ‘My Goodness My Guinness’ illustrations that adorned many student walls. Perhaps the internet has made it a lot more sophisticated.

But with the move to online marketing, there are more sophisticated problems with the way a brand is presented. Ultimately, the central concerns for drinks manufacturers are ensuring the correct trademarks are associated with the product and that the correct product is being sold through online retailers.

While branding online provides marketing departments at drinks companies with a lot of solutions for better reaching their intended audiences, it can also be the cause of many problems associated with protecting their names. With further growth in online marketing, one can be sure that further headaches await brand owners and IP lawyers in the future.

Leighton Cassidy was assisted by Sonal Patel and Amy Lambert.