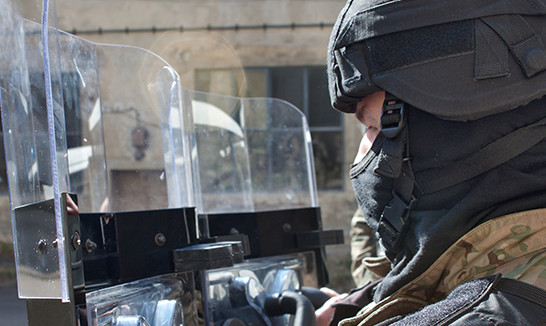 In the UK, a police unit dedicated to tackling IP crime has been making its mark, so TBO visited its headquarters to speak to Andy Fyfe, the recently departed chief, about the unit’s work and what the future holds.

Make your way down Bishopsgate in central London and you will see several ominous-looking police vans guarding the entrance to the City of London Police. It is here where officers gather intelligence to keep the streets safe from crime.

But within the building, a team of officers are also working on a form of crime-prevention that you might not normally expect of a police force: cutting down on, and arresting those who commit, IP abuse.

The Police Intellectual Property Crime Unit (PIPCU) has been running since September 2013. Primarily targeting online infringement, the unit is being initially funded with £2.5 million ($4.2 million) worth of government money.

To those outside the industry, IP crime may seem a surprising thing for the police to be spending their time on. But, according to PIPCU’s head, detective chief inspector Andy Fyfe, the government has recognised “for some time” the need to tackle IP crime.

“Online IP crime, such as digital piracy as well as the sale of counterfeit goods, has long been a problem. The government recognised that it really needed to do something about it,” Fyfe, who was a patent attorney before his police career, tells TBO during an interview at the unit’s headquarters on Bishopsgate.

“The government thought the quickest way of doing this was to offer some money to the police so they could form a unit directly looking at this type of issue.

"our BPI representative has access to the organisation’s intelligence and obviously has knowledge of the film and music industry and the way in which online piracy happens."

“The case for running it was put forward by the City of London Police, as we have experience of running bespoke units dedicated to particular issues,” he says.

Since its establishment last year, PIPCU has made more than 20 arrests following raids and has shut down thousands of illegal websites. Although he is departing from the unit, Fyfe says he is proud of PIPCU’s achievements.

Adorning the walls of the office are reports of some of PIPCU’s biggest scalps. “Arrests in counterfeit raids” and “PIPCU suspends 2,500 websites” are among the stand-out headlines from various press cuttings.

It’s an impressive haul of achievements considering many of the team did not have specialist IP knowledge before taking up their roles.

But, as Fyfe explains, aside from the team of 19 investigators, researchers and analysts working with him, many of whom are busy at their computers or on their phones in the next room, the unit does not act in isolation.

“Seconded into the team are representatives from the creative industries, including from the British Phonographic Industry (BPI) and the UK Intellectual Property Office (IPO),” Fyfe explains.

“They work very much on the intelligence side. For example, our BPI representative has access to the organisation’s intelligence and obviously has knowledge of the film and music industry and the way in which online piracy happens. It’s not just a case of the police trying to work the problems out for ourselves.”

Fyfe continues: “For many years the creative industries have known that IP crime is a problem but what they have not had is help from the police who have specialised knowledge of how to tackle organised crime gangs. It has not really been done in a coordinated way before.”

As with any police force, there is more to the job than making arrests; what goes on behind the scenes away from the public eye is where the majority of the hard work is carried out.

Normally, says Fyfe, PIPCU acts on intelligence passed to it by its partner organisations such as the BPI.

“The nature of the referral would determine how long it would take us to carry out any action,” he explains.

“Generally we would receive the information and work from there. There are a number of things to consider: for example, where these people live, who they associate with and what the best approach is in terms of gathering evidence and eventually making arrests.

“Normally you would expect to take a couple of months of proper planning, right from a referral at the start to us actually going out and carrying out raids,” he says.

But, says Fyfe, PIPCU could take action instantly in the most serious cases.

“If we had reports of something really dangerous being put on the market that could affect people’s health, for example fake electrical items, and there was a need for urgent action, we can do it—it is the nature of being the police.”

Although Fyfe is departing, he and the team, including his replacement Danny Medlycott, know how important it is keep the unit running beyond June 2015, when the current government funding is set to expire.

"Users looking to access the sites that PIPCU has taken over will now be greeted with a banner informing them that the website is under investigation."

However, as TBO reported earlier in the year, the government, including the UK’s IP adviser, MP Mike Weatherley, who is set to retire next year, has made positive noises about extending its funding.

“In July we had meetings with the IPO and others to work out how we can get to a point of extending our funding beyond next year,” says Fyfe, adding that it has now reached a “crucial stage” in the battle.

“Overall, both the government and industry are saying PIPCU is fantastic but there is still the debate over who will pay for us.”

This debate, according to Fyfe, is split between the government and industry officials, both of which believe the other should cough up the funding.

He is wary of being drawn into the argument.

“Our job is simply to show that we can be successful if we get the funding we need; we will let others debate who should pay for it,” he says.

Despite its apparent cut-off date looming, some of PIPCU’s more adventurous operations are just getting off the ground and should, according to Fyfe, continue to flourish.

These include the Infringing Websites List (IWL), which is part of Operation Creative, a scheme designed to disrupt websites providing unauthorised access to copyright material. The IWL provides details of copyright-infringing websites so that big brands can remove their adverts from the sites.

But crucially, he says, a brand itself is not always aware that its adverts are being displayed.

“Often brands ask advertising agencies to get the advert spread out as far as they can and on different websites, but there are not always ways to control where these adverts end up.”

Despite this, “big brands are very conscious that they do not want to be associated with such websites”, he says.

At the time of writing, around 80 websites have been added to the list, some of which PIPCU has managed to completely take over.

Users looking to access the sites that PIPCU has taken over will now be greeted with a banner informing them that the website is under investigation and a link to the PIPCU website, where they will be educated on copyright issues.

“Even from those few websites we have had nearly two million people routed through to our page; to me that sounds like a lot,” says Fyfe. “It shows the scale of the problem and how many people go to these kinds of sites.”

Although PIPCU is currently just a UK-based unit, Fyfe points to recent events that could lead to its working more with overseas authorities. He points to an example of when PIPCU was able to act on information from abroad to help with arrests on UK shores.

“Although we can’t mention the country, their operations on counterfeiting and information on a factory producing counterfeit goods led to a link with the UK,” Fyfe explains.

“They passed that intelligence on to us and we were able to make arrests. It was the first time we have ever received information from that country. If we can form a relationship with them, and assuming its intelligence is working, we can really get things moving forward.”

Its future may be uncertain but PIPCU’s passion and commitment to stamping out IP crime, especially online, cannot be denied. Recent events, such as support from prominent MPs and a visit from Home Secretary Theresa May should also go some way to alleviating its concerns.

Ten years ago the notion of a police unit tackling online IP crime would have seemed unlikely. But with artists, management organisations, big brands and advertisers all at risk, perhaps now is the time for the government to start thinking about a permanent solution