On the political campaign trail 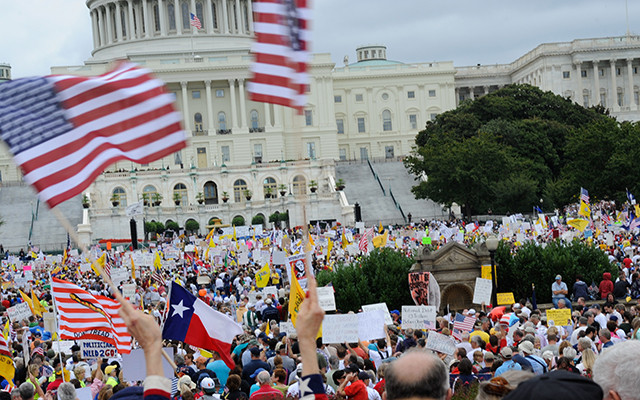 When it comes to the crunch, the First Amendment is all about content and if it's more political than commercial then a passing off claim goes out of the window, as TBO reports.

The 2015 UK general election is fast approaching and the political parties are sculpting their manifestos and preparing their slogans. Digital campaigns are already in place, and an Ipsos Mori study published in March declared that a third of voters will be influenced by social media.

But in the helter-skelter of an election campaign, intellectual property rights are often overlooked. In the past, politicians have found themselves skipping past trademark and copyright laws in their rush to put forward their campaigns on a website or social media. As a result, they’ve been involved in various disputes with mixed results.

“There’s a lot of disregard for copyright laws and trademark laws in general on the internet,”

says David Lizerbram, a partner at law firm Lizerbram & Associates. Already there has been one instance of a copyright dispute involving a UK political party, several months before the general election.

In December, the UK Independence Party sent a Christmas card that featured a cartoon from The Telegraph newspaper showing the party leader Nigel Farage flattening the three leaders of the Labour, Conservative and Liberal Democrat parties.

Cartoonist Christian Adams took to Twitter to state that he had not given permission to UKIP to use the image. The debate over the copyright ownership continued on the social  media site, with UKIP later buying the rights to the image.

The incident showed the role the internet, and specifically social media, can have in broadcasting IP issues that may not have come to light before.

In the US, Mike Ross, a member of the Democratic Party, found himself in hot water last October over his use of a song and lyrics from a 1991 Gatorade advertisement featuring Michael Jordan, in his bid to become governor of Arkansas. Two advertising agents filed a copyright complaint stating that the campaign advert that was broadcast on television and uploaded to YouTube infringed their copyright.

“This would have never happened before the internet,” says David Kluft, partner at law firm Foley Hoag, “but now somebody in a big city like New York can see a political advertisement from Arkansas,” referencing the regional nature of certain TV political broadcasts.

UK law restricts political parties to five minute broadcasts on television. But in the US there is no such restriction. The advent of the internet, however, has meant that adverts that previously only reached regional audiences now find global audiences once they are uploaded onto YouTube. It means the clips and footage politicians use in such adverts are under bigger scrutiny from right owners than they were in the past.

Mitt Romney, the US presidential candidate for the Republican Party in the 2012 election, found himself in trouble with right owners on multiple occasions.

During the primaries, which Romney won in order to be the presidential candidate for the Republican Party, he ran a video criticising opponent Newt Gingrich. The advert used footage from news network NBC and images of Tom Brokaw, a news presenter on the channel.

NBC took exception to Romney’s alleged unauthorised use of its material. Romney was in trouble again during the same election cycle, aft er a 30-second political advert criticising Barack Obama was taken down from YouTube because it featured the opening to Al Green’s song Let’s Stay Together.

Licensing company BMG Rights Management asked YouTube to take the advert down; the website initially complied but later put it back up after Romney claimed his use was fair. Romney is not the first politician to use footage from a news network without permission, but there are very few instances of legal action arising. Kluft explains: “Politicians will often use montages of news clips about their opponents or about themselves. In these cases, letters are usually exchanged out of the public eye.

“They wash off so easily because they come up a lot. By the time you hire a lawyer, and file a suit, the advert is taken down by the politician."

“But networks are not going to sue. For several reasons it is not worth it. The money recovered will not cover the amount of resources gone into the claim and these politicians are buying a lot of advertising space from these networks. Also, it is usually forgotten very soon after its use,” Kluft says.

“They wash off so easily because they come up a lot. By the time you hire a lawyer, and file a suit, the advert is taken down by the politician. You can try to get damages, but most people don’t go for this option because the advert is only run for a short period of time,” he adds.

For Kluft, the boundaries between commercial and campaigning purposes are blurring, raising issues for courts about what may constitute an infringing use of material and what is protected by the fair use doctrine.

“Money is such a big part of politics and fundraising so I would take issue with the statement that there is no commercial aspect,” he says.

In the US, the spectre of the First Amendment can haunt copyright claims. Despite the common complaint from US voters that there is too much money in politics, the First Amendment affords protection to free speech, including by politicians and their critics.

The First Amendment is given a lot of reverence by courts, and for this reason, Lizerbram says, courts will tend to side with protecting political speech from infringement claims.

He says: “Generally speaking, political speech is held to be a very high level of speech. So to the extent that somebody is speaking within the context of a political campaign or a political issue, I think the courts will have a tendency to lean in favour of that type of speech.

“These things come up a lot of times in terms of music. They’ll play music during campaigns, events, adverts and so forth, and often times the musician or composer may or may not agree with those views,” he adds.

But politicians sometimes find themselves on the other side of an IP infringement claim and attempt to protect their rights. This is perhaps most clear in disputes over domain names, where critics rush to register the name of a politician under a top-level domain name such as .com or .org.

The main fear is that when a voter looks to find the official website (which details policies) of a politician running in an election, the first site he or she might come across is one very critical of the politician and unrepresentative of its views.

One such case involved New York politician Virginia Fields. Her attempt to transfer virginiafields.com under the Uniform Domain Name Dispute Resolution Policy (UDRP) failed in 2007. The panellists presiding over the case ruled that because her name was not attached to any “goods or services”, she was unable to assert a trademark right. The website still stands today, with a comment at the top stating “she ran for mayor but no-one wanted her”.

Taking control of websites is a difficult task for politicians, even if they are fan sites. Ron Paul, a three-time (including primaries) US presidential candidate for the Republican Party, failed to transfer ronpaul.com through a UDRP complaint in 2013. Paul claimed his name was protected under trademark law because it was associated with several books he had written, and that the website was registered in bad faith because it sold merchandise featuring his name. He claimed the owners of the website even tried to sell him the domain for $850,000.

Paul’s UDRP complaint was rejected by a three-person panel because the “combination of political speech” and the “substantial lack of commercial intent” meant that Paul could not transfer the domain. Like virginiafields.com, ronpaul.com still stands today, selling merchandise featuring his name.

Both these cases highlight how difficult it is for politicians to protect their name online using the UDRP. Kluft says: “Under the UDRP, there is a fair use argument critics can assert. The First Amendment is all about content and if the content is political then a passing off claim goes out of the window. The big fight in a case like this is whether it is more political than commercial.

“I’d advise a politician to register a bunch of domain names with their name. It is a lot easier and cheaper than hiring somebody to go and fight it out in the court.”

“It is a smart thing to do if you register, but there is a limit to what you can do. You can’t stop somebody from criticising you, and somebody is going to find some permutation of your name to register. The big picture under US law is that the best remedy for speech you don’t like is more speech,” he adds.

As more and more politicians are recognising that recovering domain names through UDRP complaints is difficult, they are looking for strategies to protect their name before it gets to this stage.

Political parties, for instance, are taking notes from companies on how to protect their brands.

In December, the US Republican Party filed a lawsuit against the Asian American Small Business Political Action Committee over the alleged unauthorised use of its elephant logo, which is registered with the US Patent and Trademark Office.

In the same month, the Scottish Labour Party applied to register its name as a trademark with the UK Intellectual Property Office, in an attempt to show Scottish voters that its own identity differs from that of the wider UK Labour Party.

To what extent the Republican Party or other groups can use IP laws to protect their brands from critics remains to be seen. Ultimately, political parties and politicians are not brands per se, despite the fact they may want to increase their popularity among the general public. The US doctrine of fair use constantly hovers over disputes with critics, and a lawsuit may not necessarily help parties to protect themselves.

But IP rights work both ways: if politicians want to keep their campaigns online and at the centre of the debate then they must respect IP laws when rushing out the next advert on YouTube or posting another message on Twitter.