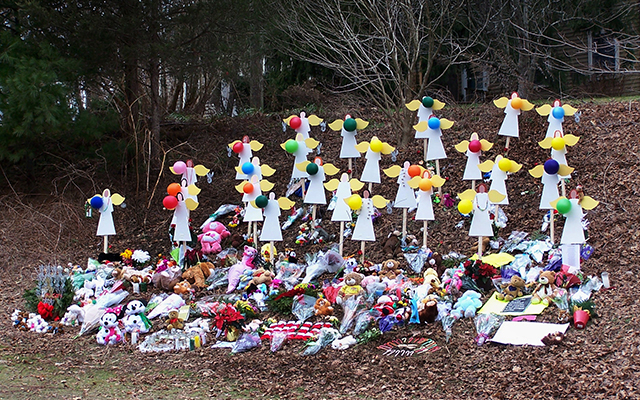 More than two years after the Sandy Hook tragedy, the family of one of the victims has tried to trademark her name to combat fake social media profiles. But will this strategy work? TBO finds out more.

There will always be some who take pleasure in other people’s misery, and on social media this is only magnified.

Abusing individuals or posting inflammatory messages online, or ‘trolling’ as it’s known, has become increasingly common. The parents of missing schoolgirl Madeline McCann, who has not been seen since 2007, pop star Gary Barlow, whose baby Poppy died before her due date, and actress Amanda Holden, who suffered a miscarriage, have all felt the sharp side of abuse on social media.

While social media sites can sometimes provide a platform to show solidarity and sympathy—the widespread use of ‘Je suis Charlie’ following the Charlie Hebdo shootings in France being a good example—the ability to cause offence quickly and very publicly cannot be underestimated.

The family of Victoria Soto, a teacher who was killed in the Sandy Hook school shootings in the US in December 2012, has also been affected by social media’s dark side as fake profiles incorporating her name have appeared online. But rather than stopping at publicly condemning the trolls, the family has taken the unusual step of attempting to use a trademark to protect her name.

The trademark application, according to the US Patent and Trademark Office (USPTO), was applied for on February 9 this year. It is a service mark, covering online advertisements, which protects the words ‘Victoria Vicki Leigh Soto’.

Speaking to US broadcaster Fox News in February, Victoria’s sister Jillian claimed people have set up fake social media accounts incorporating her sister’s name and said the family hoped a trademark would make it easier to have unauthorised pages removed.

The name Victoria Soto may well strike a chord with readers in the US after the teacher, who was 27, became a heroic victim of the tragedy. She was posthumously praised for hiding her students from gunman Adam Lanza after she reportedly threw herself in front of children who were being targeted. Lanza killed 27 people including himself.

Many of the fake accounts, according to Soto’s family, promote conspiracy theories about the massacre and Soto’s actions.

Jillian Soto also claimed that the misuse of her sister’s name made it harder for people to find links to the Vicki Soto Memorial Fund, a charitable organisation that raises money for scholarships for aspiring teachers.

“Vicki did a heroic thing; there are 11 kids that are alive today because of the actions of my sister,” Soto told Fox News.

Speaking about the trademark application, she added: “We don’t need anything negative to be tied to her name any longer. Now we can say, ‘look, they can’t use this name—it has to come down right now’”.

Could trademarking a name provide enough protection to target trolls?

David Bernstein, partner at law firm Debevoise & Plimpton in New York, says Jillian Soto’s claim that a successful trademark registration would curb trolls because “they can’t use this name” is not strictly true.

“If people are using Soto’s name for commentary about the tragedy at Sandy Hook, the registration would not allow them to prevent that,” he tells TBO.

“Trademark law is generally about protecting consumers against confusion. It does not provide a monopoly on referring to a mark or name.

“If the family’s trademark application was partly based on the hope that they will be able to stop people from referring to Soto when discussing the Sandy Hook tragedy, I’m afraid that may be based on a misunderstanding of the limited scope of trademark law.”

Ralph Cathcart, partner at law firm Ladas & Parry in New York, agrees. He says that in the US there is also the issue of the First Amendment (the statute covering free speech rights).

“A trademark cannot stop people from talking about newsworthy events, or from putting across a conspiracy theory. You might not like it, but the concept behind the First Amendment is something that does sometimes hurt people’s feelings,” he says.

From a legal standpoint it would appear that the family could struggle to assert trademark rights in order to remove fake accounts.

But in age of growing sensitivity on social media, with operators now seemingly more alert to abusive communications, could offending accounts be removed from social networking sites on moral grounds?

Bernstein says that although social media sites have take-down policies, they will normally only allow a request to succeed if there is a clear case for trademark infringement.

“Twitter, Instagram, Facebook and other social media sites usually will not take down fake accounts if the accounts are being used for parody, commentary or other free speech-related purposes.

"If the family’s trademark application was partly based on the hope that they will be able to stop people from referring to Soto when discussing the Sandy Hook tragedy, I’m afraid that may be based on a misunderstanding of the limited scope of trademark law."

“If, though, the fake accounts are used in a way that infringes the family’s trademark registration (such as to fraudulently collect donations, or cause confusion with other fundraising campaigns), then they would have a stronger basis for shutting down those sites.”

Cathcart says a trademark, if accepted, could provide another “tool in the box” for protection but will not completely solve the problem of the fake accounts.

“A potential trademark will be effective for the family because most of these social network sites, if they receive a take-down notice, don’t want to get involved in issues like this and may take down something pretty quickly following a complaint.

“The harder question is if there’s a blog or another post online that talks about conspiracy theories, as that raises questions related to the First Amendment.

“As long as they are not doing something in a trademark sense, even a registered trademark is not going to provide the relief there. For example, Madonna has her name trademarked but she can’t stop people from using her name.”

Although there are multiple famous examples of names that have been registered as a trademark—McDonald’s, Dell and Gucci to name a few—whether Soto’s name will meet the requirements for trademark registration in the US is obviously up in the air.

Cathcart explains: “It is possible to trademark an everyday name, including a surname, but the caveat is you can only do that upon a showing of acquired distinctiveness.

This would mean, he says, the name must have been transformed to the extent that its primary significance has changed and people see it as indicating a source rather than a person.

A question to consider is whether the name is associated with fundraising and the services that the Vicki Soto Memorial Fund offers, or if it still stirs up memories of the school shooting tragedy.

Cathcart says “plausible arguments can be made” that Soto’s story is well known “at least by a segment” of the US population and that the application may well succeed.

“The application is a use-based application and not an intent-to-use application. They’re claiming prior use [in connection with the charitable services the Memorial Fund offers] and it says its first use was in 2013.

“The family also has a website that looks for donations in her name. In that regard, from a theoretical point of view, there’s a good chance the family could get a trademark.”

Bernstein says it will depend on whether the applicant can show that the trademark is being used for particular goods or services.

He adds that “thousands of names” have been registered in the past and some for charitable services. These include ‘Bill & Melinda Gates Foundation’ for an anti-poverty organisation and ‘Susan G. Komen’ for a foundation that raises money to help tackle breast cancer.

Although we may be waiting some months yet before a final decision is made on the Soto application, interesting questions have been raised.

Is the Victoria Soto name distinctive enough to gain trademark protection? Is the name still associated with the tragedy? Has the commendable work her Memorial Fund offers changed what people associate with her name?