Viral marketing: out in the cold 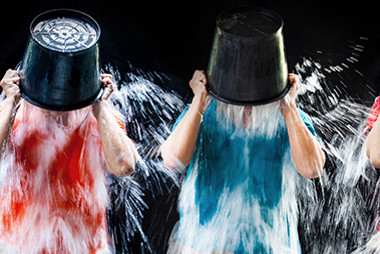 An online campaign can take off and be all over the world in a very short time, so what factors should be considered when thinking about protecting IP? TBO investigates.

Anyone who glanced at their social media page for more than a few seconds this summer would have been greeted with a video of a friend or celebrity covering him or herself with a bucket of iced water.

The ‘ice bucket challenge’ was an internet craze that swept the world and was performed by millions, from actor Leonardo Di Caprio to the author of this article.

The format was simple: upload a video using the hashtag #IceBucketChallenge and nominate two or three friends to follow suit while making a donation to charity.

In just a few short months millions of dollars had been raised for various charitable organisations.

But when the challenge’s self-appointed founder, the Amyotrophic Lateral Sclerosis Association (ALSA), which helps those suffering from the progressive neurological disease, attempted to trademark the phrase, it ran into trouble.

The many who opposed it questioned why a charitable activity should be the legal property of one organisation, yet ALSA insisted that its own idea had been hijacked by others.

ALSA eventually pulled its attempt to trademark the phrase, but the case has raised the questions of how and when an effective social media campaign should be run, particularly if there are intentions to trademark slogans or phrases based on it.

Patricia Collis, trademark attorney at law firm Bird & Bird, says ALSA’s primary reason for withdrawing the application was due to the public backlash it received.

“As with all social media issues, public perception is a key factor whatever the actual legal position,” she says.

“The public seemed to think that ALSA was claiming it ‘owned’ both the term ‘ice bucket challenge’ and the idea behind it. Some of the ire seemed to stem from the fact that other charities had promoted ice bucket challenges as a way to raise funds before ALSA did,” Collis tells TBO.

Whether ALSA came up with the idea itself is up for debate, but its ultimate decision not to claim ownership of the phrase is partly a sign of the viral nature of social media. Within weeks, hundreds of charities were involved, and determining the slogan’s origin had become a near impossible task.

Rachel Kronman, trademark attorney at law firm Frankfurt Kurnit Klein & Selz in New York, says the public backlash and lack of clarity over the phrase’s origin were not the only reasons the application was withdrawn.

One reason, she explains, is the descriptive nature of the phrase. “The trademark application didn’t offer anything new, and was purely descriptive,” she says.

“That on its own is not necessarily a bar to owning a trademark. Companies such as Orange or Apple have descriptive trademarks but they are synonymous with technology. Where ALSA failed was not using the words to come up with a new unique term.”

Iain Connor, partner at law firm Pinsent Masons, agrees, adding that ALSA was thinking “laterally” when it considered its application and that for a social media campaign to take off and get trademark protection, it would need to be considered in non-descriptive terms.

“If a slogan is descriptive of what you are doing, why can’t anyone use it?” he asks.

Kronman references a trademark application by entertainment company Disney as a similar issue to the ‘ice bucket challenge’.

The conglomerate attempted to trademark ‘Día de los Muertos’ (Day of the Dead), a Latin American holiday, but faced a heavy public backlash on social media and eventually withdrew the application.

The perception, explains Kronman, was that Disney wanted to control and own the rights to the name of a national holiday.

Kronman recalls that Disney also ran into trouble when it tried to trademark ‘SEAL Team 6’, the name of the US Navy SEAL team that captured and killed Osama Bin Laden, for similar reasons.

“With the right backing and sufficient resources,” says Connor, it can still be possible for descriptive phrases to be trademarked.

One of the most famous examples of this is Nestlé’s success in trademarking the words ‘Have a Break’, part of the advertising slogan for its famous Kit Kat chocolate bar.

Connor says: “Nestlé spent many years getting evidence that ‘have a break’ had got into the lexicon of English language even though at first look ‘have a break’ is surely just a group of plain English words.

“A lawyer will always tell you to avoid anything descriptive because you create a huge barrier to getting it registered. Unless the phrase has acquired a secondary meaning, for example ‘have a break’, you cannot get protection. You need the fame before you can get protection for a slogan in place.”

While ALSA may have made mistakes by attempting to trademark ‘ice bucket challenge’, was trademark protection necessary in the first place?

Collis warns that social media has a tendency to “speed things up”—a campaign can spread and become popular overnight, but in turn people can move on just as quickly.

“This makes it difficult to know how to approach trademark strategy,” she explains.

“If something takes off unexpectedly, by the time a trademark application is filed, let alone granted, the public may have moved on.”

She adds: “It will always be a case of balancing a number of competing factors, and working out what will be the best use of resources in the long run. This can change from brand to brand or even campaign to campaign.”

The speed of social media was clearly a factor in the ‘ice bucket challenge’ case, with the campaign dying down after just a few weeks of hysteria.

But Connor says he can still see the positives of a social media campaign, even if trademark registration is not obtained.

“If you put together a campaign that takes off, using social media gives you instant recognition,” he says.”

Kronman agrees, adding that social media can be “an excellent vehicle” provided a brand or organisation has the right expectations and is prepared.

“You don’t always need to file a trademark,” she adds.

“Sometimes brands come up with slogans and phrases with a short shelf life, and they go viral. In some cases brands don’t care if it becomes part of public dialogue.

“But if it’s something that might become a bigger part of its portfolio and be used in the long term then you should file for a trademark,” she says.

One of the best examples of a company promoting itself online without IP protection was Budweiser’s ‘Whassup’ campaign, recalls Connor.

The advert, which depicted friends calling each other and shouting ‘Whassup’, was repeated numerous times in various parody and re-enactment videos.

“For about 12 months that was everywhere,” says Connor. “Although it predated many current forms of social media it had the same effect in that was emailed around to a huge amount of people.

"for a social media campaign to take off and get trademark protection, it would need to be considered in non-descriptive terms."

“As a brand owner, if you are launching a campaign like that online you have to be prepared for the event that other people will use it, sometimes in ways unrelated to your brand. The advert was used and recreated in many contexts—some Budweiser would not have intended—but for the most part it had its desired effect.”

Collis agrees. “A good campaign really is about capturing the public attention, and has very little to do with trademark protection per se,” she says.

“At the same time, having trademark protection in place as early as possible often makes it possible to prolong the life of a successful campaign,” she adds.

The reasons for ALSA’s failure to obtain a trademark may have been down to the fundamental basics of trademark law, but the publicity that its efforts received have raised interesting questions. The viral nature of social media, which in the end contributed to the application’s downfall, can clearly have both positive and negative consequences. On the one hand, a slogan or idea can be picked up on a global scale regardless of whether it is intended to form part of a long-term campaign. But, from a brand owner’s perspective, with that comes the reality that unless you are quick off the mark, you may have to forgo protection.