Wikimedia has been branded “disgraceful” by the photographer at the centre of a copyright dispute over a monkey’s self-snapped image.

It comes as the organisation has asked its members to vote on retaining or removing the photo from its freely-available database of media content.

Wikimedia, the non-profit owner of Wikipedia, was asked by David Slater to remove a ‘selfie’ of a grinning crested black macaque from Commons, its repository of nearly 23 million freely usable media files. 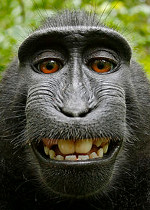 Slater’s camera was stolen by the monkey while he was trying to photograph it in Indonesia three years ago, but he argued that he owned the copyright and was missing out on royalties.

But as revealed by a transparency report published yesterday, August 6, Wikimedia disagreed, saying the file is in the public domain because it has no human author who could claim copyright.

In response, Slater, who is British, told TBO that Wikimedia and Wikipedia are acting “disgracefully”.

“They have become so arrogant that they believe they can act as arbiters of law, as well as truth. This is dangerous.

A Wikimedia spokesman confirmed to TBO that, contrary to many reports, it doesn't believe the monkey owns the copyright—instead, no-one does.

“Under US copyright law, for example, non-human authors can’t own copyright. It’s clear the monkey was the photographer. To claim copyright, the photographer would have had to make substantial contributions to the final image, and even then, they'd only have copyright for those alterations, not the underlying image,” the spokesman said.

In the latest twist in the saga, Wikimedia is now asking its community, which comprises several dozen people, to vote on whether to keep or remove the image from Commons. The community has a week to vote, and if there is no consensus the image will stay online.

A British newspaper, The Daily Telegraph, quoted a Wikimedia user as saying so far 14 users have voted to keep the image and four to remove it.

If Slater wants to show he was the image’s author according to UK law, said Adam Rendle, senior associate at Taylor Wessing LLP, he would have to show he was sufficiently in control of the monkey and the setting up of the photograph, and that the monkey simply pressed ‎the shutter release to his order.

“The facts are unclear but it seems unlikely he could show that level of involvement in a spontaneous photograph taken by a wild animal. For similar reasons, he would likely struggle to show that this was a computer-generated work of which he was the author on the basis that he had undertaken ‘the arrangements necessary for the creation of the work’,” he said.