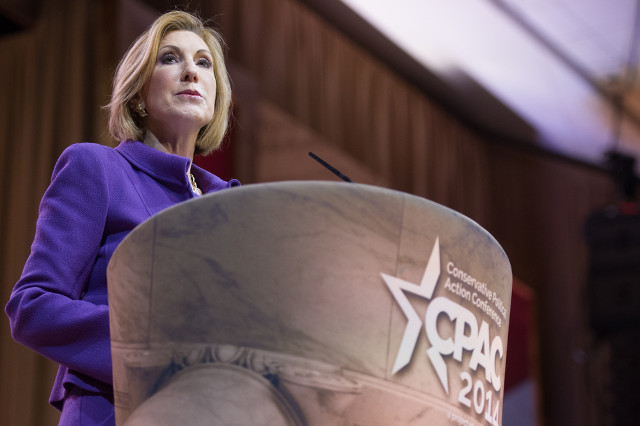 A potential presidential candidate in the US has registered a domain name containing journalist and television presenter Chuck Todd’s name and linked it to her own campaign page.

Carly Fiorina, a potential candidate for the Republican Party, announced on Twitter yesterday (May 10) that she had registered the domain name chucktodd.org  to link to her presidential campaign, carlyforpresident.com.

It was the second time she had registered a domain name with a famous person's name in the title.

On the show, Todd challenged Fiorina about her time spent as the chief executive of technology company Hewlett-Packard (HP), claiming that she sacked 30,000 workers from the company.

She registered sethmeyers.org on May 5 after he referenced another domain name, carlyfiorina.org, that had been set up by a Canada-based individual.

The website outlines criticism of her time at HP. Fiorina joined HP in 1980 and in 1999 became chief executive. She left the company in 2005.

On the website, it states: “Carly Fiorina failed to register this domain. So I’m using it to tell you how many people she laid off at Hewlett-Packard.”

It goes on to show a colon and a bracket to mimic an unhappy face. There are 30,000 in total which symbolises each individual who allegedly left the company during her tenure as CEO.

Another website, hilaryclinton.net, also takes users to Fiorina’s official page. According to Whois records, it was registered on November 28, 2014, but it is not clear if the registrant has any connection with Fiorina.

The spate of registrations has been referred to as #domaingate by many Twitter users.

Joshua Jarvis, associate at law firm Foley Hoag in Boston, told TBO: “I fully expect this type of domain name gamesmanship to continue to be a regular part of the political process, for all the usual purposes.

“This could be from using them to host websites featuring genuine criticism and attack advertisements, to registering domains for the sole purpose of depriving one’s opponent of their use,” he added.

Last week (May 4), Fiorina posted a YouTube video confirming that she was running as a potential presidential candidate for the Republican Party in the 2016 general election.